Help, he growls at me! (when it’s not for show) 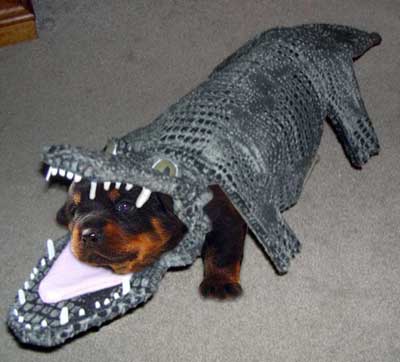 In another article we talked about puppies and young dogs biting while playing with humans.
Today we approach a much more serious problem, concerning the puppy or young dog showing real “aggressiveness” (or something you feel like aggressiveness) towards their humans: I’m not going to talk about adult dogs, even if reasons and solutions can be the same as for puppies.
Let’s begin saying that newcomers can often mistake playing for aggressiveness: I’ve seen many dogs, who were described on the phone as being “aggressive and dangerous” (especially towards children) and that ended up being just playful puppies growling and biting just for show. 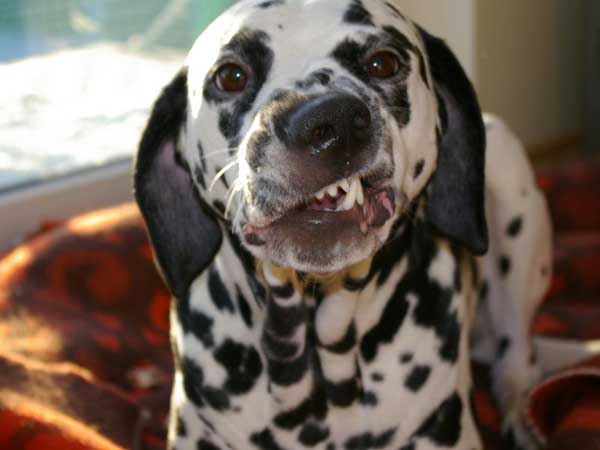 Some people mistake for growling the “smile” typical in some breeds (as Dalmatians), that is a signal of pacification-friendship: but you rarely see the “smile” in very young dogs (if they’re not the children of a smiling mother, so that they imitate her behavior), because it’s deemed to be a true imitation of the human smile, showing up when the dog has learned the friendly meaning of our smiles.
How can a newcomer tell apart a playful growl from a menacing one?
The “experts” are always in the mood to laugh when they see a nice little lady so worried about his puppy and they discover he simply acts out of excitement while playing tug whit the children: if you know dogs you see an abyss between aggressiveness and playfulness, so you can’t understand why someone could mistake one for the other.
But, looking closer, we can see that people misunderstanding that have very few tools at hand, seen that the main resource is experience (and those people don’t have it) and the ability to “read” the dog’s general attitude (and they don’t have that either). 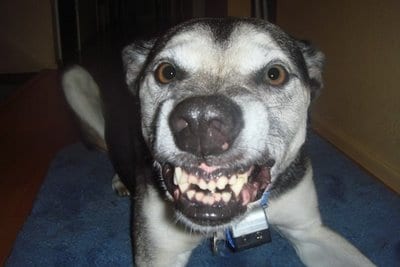 Well, growling always is meant to be menacing, actually: it’s something like saying “Come closer I want to smash your face”, or “stop or I’ll kill you!”
Of course, there is a difference between those sentences on the lips of two friends having fun together and two strangers having a serious argument: same phrases, different “environment”.
In the first case the person talking would be relaxed and smile or even laugh aloud, while in the second case you’ll find aggressive expression, gesture, face.
Same goes for the dogs: but we can’t go far if we don’t know what’s the face of a relaxed dog and what’s the face of a tense and nervous one.
So, advice number one: read a good book about dog language, his facial and body mimic, his signals.

Advice number two: learn the difference between “growl” (closed mouth, or full mouth, because the puppy would send it forth when chewing something) and “snarl”, open mouth.
The first sound can be just a warning (“I’ve had enough”, “don’t come any closer”, “don’t touch me, I don’t like it”) or a playful sound (as the human “I’ll kill you!” said for fun), the second sound is always a serious menace, and sometimes the real aggression comes next.
We have different shades between “growl” and “snarl”: a dog can start with a growling sound, than – in a matter of seconds – bare his teeth, then open his mouth completely and go for the stronger menace.

But when does a dog seriously menace someone?
Adults can have several reasons to do so: sexual or hierarchical competition, territoriality, protectiveness of their children, predatory mood and so on.
Pups and very young dogs can’t even feel some of that impulses: so, aggressiveness (better, first “symptoms” of aggressiveness) are usually linked to three main factors: self-defense, possessiveness and food guarding, a kind of possessiveness but more deeply rooted in any animal, because food means survival. 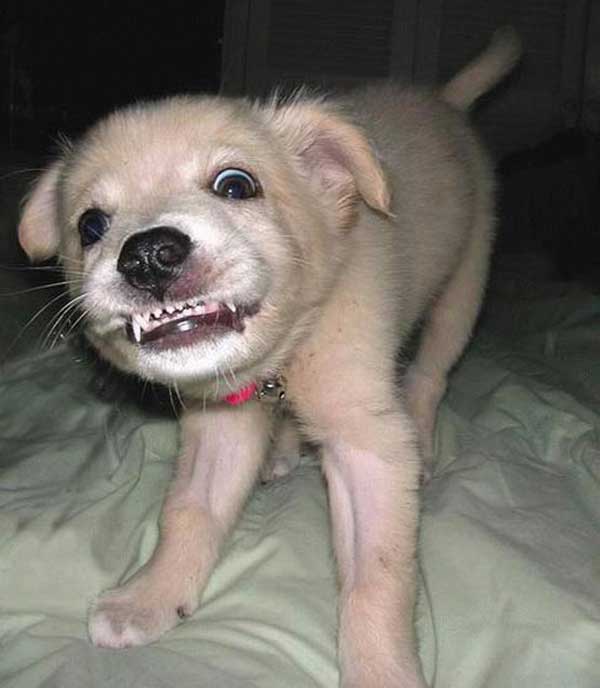 Remove from your mind the thought that a puppy can growl because “he’s being dominant”: the very idea of dominance and hierarchy DOESN’T EXIST in dogs younger than three months (the phase of hierarchical arrangement in the pack doesn’t start before that age), and a very young dog (four-six months old) hardly feels the impulse to challenge his human, but he’ll do if the human proved a completely helpless “leader”. But, even if he thinks about improve his hierarchical role, it’s hardly likely to choose the physical challenge, because he knows fully well he’s not mature enough for someone bigger and stronger than him. So, he’ll try the psychological way: disobedience, “lack of respect” (like stealing the couch or the slippers), but he’ll NEVER come to the menace/attack for hierarchical reasons.
For this reason, if lately you lived on bread and Cesar Millan, I suggest you to forget everything you heard about “how to use your power on a dog”, because THIS MUST NOT APPLY to puppies (as for myself, I’m powerfully against Millan’s methods for adults too, but dominance and little puppies don’t mixt, and as for a little older ones, you should apply dominance with wisdom, consistency, patient and construction of a charismatic, authorative rather than authoritarian figure).
And now, let’s see why a very young dog could threaten to bite: 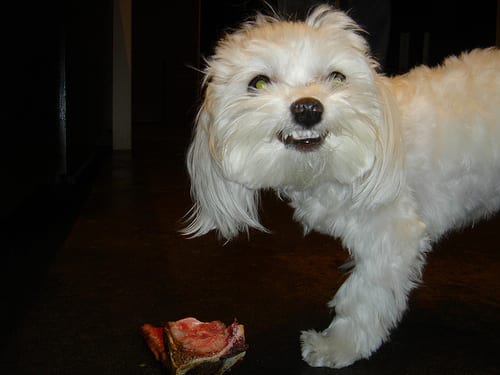 FOOD GUARDING: growling on his bowl, when you try to touch/move it, or on his bone.
Pups have the right to act this way, because (from their point of view) they’re protecting their own life: so, it’s legitimate to explain them that they shouldn’t growl/bite, but just because THERE IS NO REASON TO.
Best way to persuade your dog that you don’t want to take away is food, is to touch his bowl only to ADD more food: so, from the very first day, put in his bowl just half of his meal, then, when he has started eating, add the rest bit by bit, letting him see/smell it your hand with the food before, then put it into the bowl, then move the bowl a little, then put your hand directly in the bowl, etc. but don’t take the bowl away till he’s finished.
In a few days your puppy learns that “hand approaching” doesn’t mean “dangerous bowls’ thief in sight” but “more food”: so he has not a reason why to menace you, because he doesn’t feel threatened.
Simple, logic and easy to put into action. 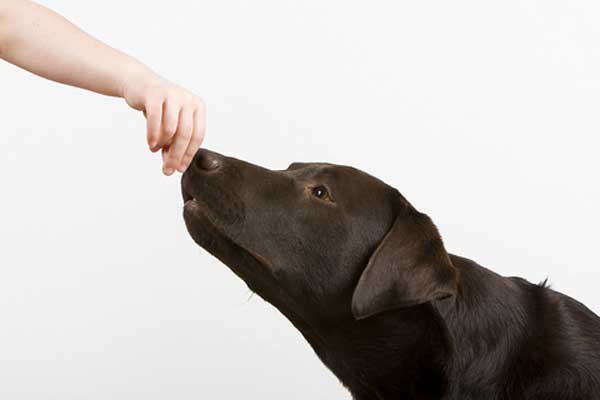 Puppies used to see hands “adding” food into the bowl, not taking it away, wag happily their tail when you touch the bowl.
With young dogs already food aggressive (and with adult dogs, especially if you adopted them from shelters, when there is a high degree of food competition) you must start a step away, showing openly your hand offering food: don’t put your hand directly in his bowl, make it come slowly closer and closer, so that he has the time to understand what’s happening (otherwise you could be bitten).
If the dog is very food aggressive, give him an empty bowl, then put food in it by and by, so to train it to the concept of “hand that gives”. 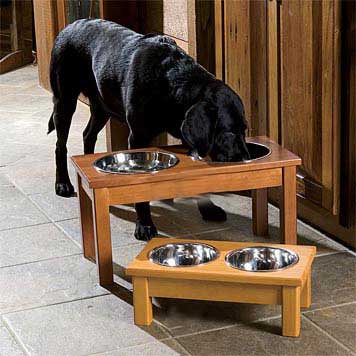 More useful tricks:
a) Use more than one bowl: while the dog eats from one, put food in the other
b) Teach the commands “WAIT” and “TAKE IT” (or something else: NON YET to make him wait, EAT, OK or something of the like to release him. As you know, a word doesn’t mean anything for the dog, until it doesn’t influence him to an action)
This is for the dog (puppies and adults as well) to understand that you handle resources, so you’re in charge.
Use WAIT whenever you offer him something (bowl, toy, bone: anything): bow with the object in your hand and stretch the other hand towards his mouth, saying WAIT.
He can do anything (jumping, barking, going crazy) just ignore it.
At some time, he’ll sit down, or settle down anyway: then give him what you had in your hand, with a releasing command (I use TAKE IT, but anything will do: OK, EAT and so on). Repeat whenever you give him something, calmly and patiently. 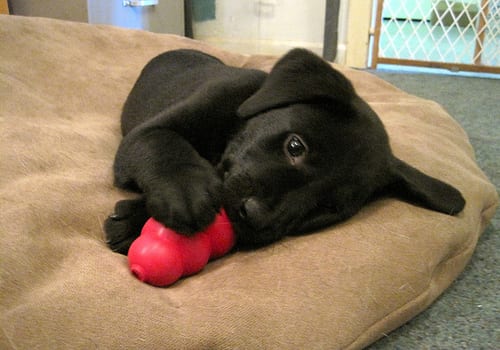 c)  If your dog goes completely crazy when he sees food, you can substitute the bowl with a kong for a few days: it’s a food toy, you put dog food in it and the dog must find the way to make them come out. Using a kong compels the dog to think during meals, so it gradually erase too high a food excitement.

POSSESSIVENESS: when a puppy guards too aggressively his bone or toy, because “they’re his own”, you should act like with the food: hands taking something away should always give something else in return: a treat, another toy, something the dog likes very much. FIRST you give something new, THEN you take away what you wanted. 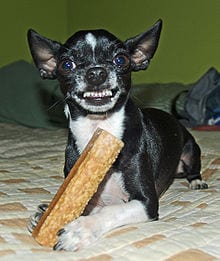 SELF-DEFENSE: usually, puppies DON’T change into self-defense mode, if they didn’t have some unpleasant experiences before. So, to avoid this reaction, it’s enough not to provoke it. Growling/biting dogs are always dogs who have been beaten, threatened, well, treated “the Millan way”, when you deem leader the one who forces his leadership upon others instead that introducing himself like a figure worth of love and respect.
To recover damages, reverse your aggressive/violent behavior completely, and do as written above, taking the slow way, of course, carefully and especially observing distance (proxemics): puppies/young dogs have a “safe distance”, if you don’t cross the line they’ll feel safe, but when you do they become nervous and start to show a little aggressiveness.
First stay on your side of the line, and come closer by and by, as the dog understands he has no reason to be afraid of you.

Help, he bites me!

by VALERIA ROSSI - Trad. Mariafelicia Maione Wait, we’re not talking about aggressive dogs biting their humans: but about dogs who play with their humans,...
Continua a leggere
English version

by VALERIA ROSSI - Trad. Mariafelicia Maione Premises – While writing my articles about conferences I made throughout Italy with Claudio Mangini and his tutor...
Continua a leggere
English version

Dominant who? (i.e., alpha dogs and row dogs are not the same thing)

by VALERIA ROSSI - trad. Mariafelicia Maione Here we go again. I heard that, again! It was long since the last time, perhaps because even people...
Continua a leggere
English version

Some breeds are “genetically” given to rows?

by Valeria Rossi - Trad. Mariafelicia Maione - Best thing about publishing ethological articles is that they arouse interesting and smart questions, worth of...
Continua a leggere
English version

Which dog in which house (and in which life routine)?

By VALERIA ROSSI – trad. Mariafelicia Maione I’m always asked questions like these: “I’m just like any other human who must earn his bred: I...
Continua a leggere 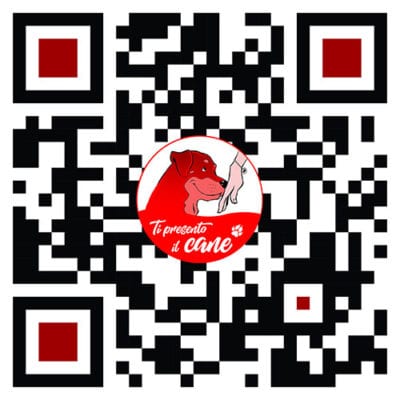